5 Reasons Why Your Child Will Benefit From Speaking Spanish Fluently 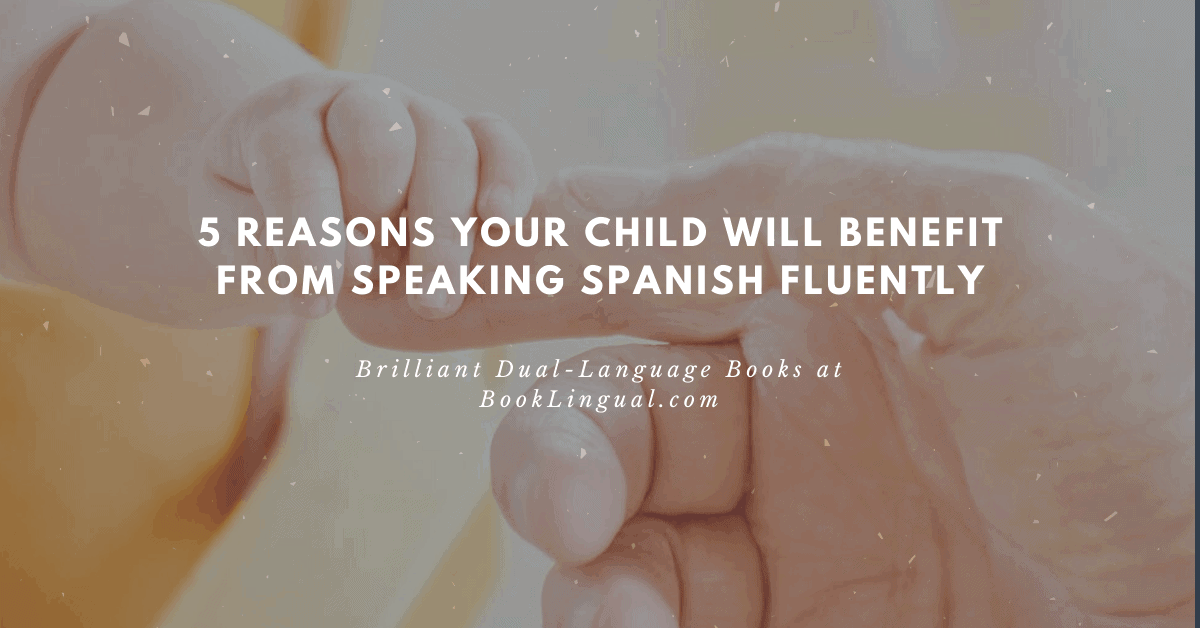 Raising your child to speak two languages fluently is not always easy, particularly if you live in a monolingual household. However, it is well worth your time, as your child will reap many benefits as a result. Here are 5 reasons your child will benefit from speaking Spanish fluently.

What is the best way to raise a bilingual child? By exposing them to both languages in a vast range of formats and natural settings. BookLingual is a very powerful system where they will acquire the language by osmosis rather than through formal learning activities.

How do you raise a bilingual child in a monolingual household? There are many ways that you can learn Spanish effectively. It is best to learn as a family unit so that adults and infants learn together. BookLingual provides an excellent array of dual-language books to help children, as well as parents, learn introductory Spanish. Consequently, being able to show children your own excitement about learning Spanish is important. Your hunger to speak the language is something they will be delighted to imitate.

Using language learning and translation to develop a global mindset

We now live in a global community. Technology has brought us closer together. That doesn’t mean that locally focused, insular attitudes don’t still exist across the world. They most certainly do.

By raising your child to love the Spanish language, many doors will be opened. Engaging in translation activities from an early age can naturally introduce elements of other cultures. It enhances the learning experience. As they explore the language, children can learn not just about Spain but about countries around the world. Spanish is spoken in a vast amount of locations. In today’s global economy, bilingualism can and will provide benefits that can serve a lifetime.

Spanish is an official language in 20 countries. Spanish is spoken in Spain and across much of Latin America. In the United States, 13% (around 43 million people) of the population speak Spanish as a first language. Places such as Equatorial Guinea and in numerous other countries and territories also have native Spanish speakers. Teaching your child Spanish from an early age can allow access to these locations for life. It also provides them with some fascinating cultural insights as they grow and learn.

By raising your child to be bilingual, you are teaching their brain to function as their own personal translation service. You are also providing them with a talent that many of their peers won’t have. This ensures that they have a defining skill in the competitive school environment – and what child wouldn’t want that?

Raising your child to speak Spanish fluently will impress their teachers as well as their peers. That is because being bilingual can boost academic performance in a number of ways. Children who speak Spanish fluently as well as English will have advantages over their monolingual peers. Bilingualism benefits include enhanced cognitive functions, more advanced social and emotional skills, and superior literacy, to name but a few. These positive effects begin at an early age and will continue throughout their lives.

A bilingual child will have plenty of options open to them when they grow up and leave school. Whether they decide to enter the international job market, pursue a career in the translation sector, or utilize their language skills to work overseas in a diplomatic role. They also can simply pack a rucksack and travel to many countries worldwide. Consequently, they will have a distinct advantage over their monolingual peers.

Looking this far ahead while your child is still young can help to inform a huge range of parenting decisions. These decisions include language learning. You might not be defining quite such a set path as school, then university, then a translation company job when your child is still in diapers, but you can at least factor in the broader, longer-term impact of raising them to speak Spanish fluently. In this case, that means providing them with a greater choice once they have finished their formal education.

Helping your child to become bilingual can even protect them further into the future. The enhanced cognitive functions (when compared with those with monolingual brains) that are associated with bilingualism could help your child to stave off dementia as they age, according to a study exploring the link between bilingualism and the aging of the brain.

Spanish translation and bilingualism – the benefits

These lifelong benefits will apply regardless of which languages you raise your child to speak, provided you start with at least two. For discussion purposes, we will discuss learning Spanish in particular. There are several benefits of bilingualism and understanding those advantages for Spanish translation is equally important.

In terms of total fluency numbers (that is, those who speak the native language and those who speak it as a second language), Spanish is the world’s fourth-largest language, with a total of 527 million speakers spread throughout the world. Those fluent in Spanish or considered native speakers are ranked second globally; only Mandarin has more native speakers than Spanish (at 897 million and 436 million respectively).

By teaching your child to speak Spanish fluently, you are thus providing them with the potential to connect with 527 million more people than those who do not speak Spanish. That is a staggering amount of opportunity!

So, if you are wondering whether or not to raise your child to speak Spanish fluently, the answer (in our humble opinion) is a resounding yes. Doing so can help them to:

5 Reasons Your Child Will Benefit From Speaking Spanish Fluently

• Develop a global mindset and appreciation of other cultures

• Gain an interesting skill to impress others

• Potentially stave off dementia in later stages of life

In conclusion, there are several benefits and advantages regarding the bilingual brain. It is time to take your child on a learning journey that you can actively be a part of. Family dual-language learning is also a lovely way to spend family time. Instead of a traditional language acquisition class structure, why not let BookLingual provide your family with a fun and exciting way to learn Spanish through hard-copy books, eBooks, and fun activities for the cost of one video game? Enroll in the Complete Spanish for Kids Program now by clicking here.